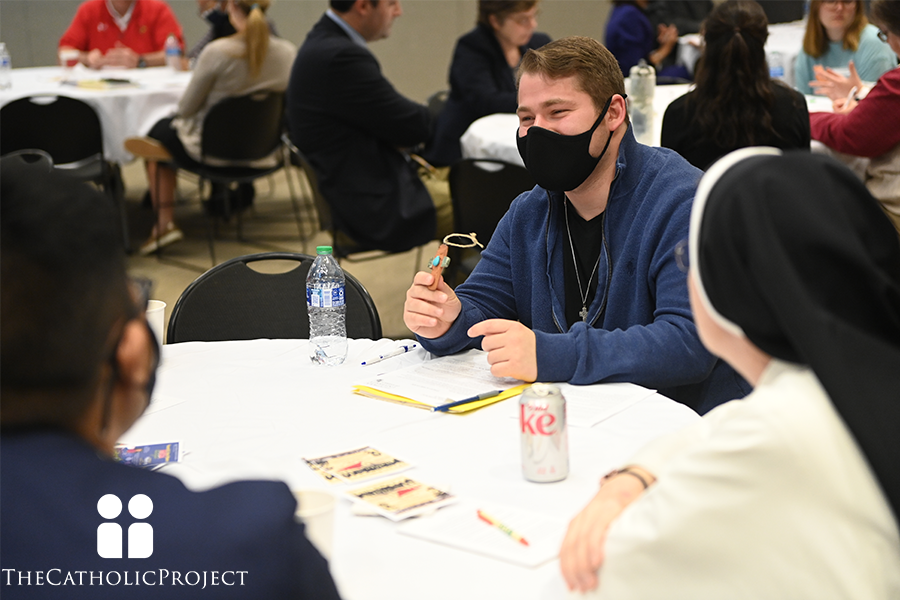 What Can We Call It?

“What is an experience that you have had at Catholic University that exemplifies for you what it means to be Catholic?”

This was the penultimate question of Catholic U’s synod sessions, held by The Catholic Project in March and April. It is the kind of question that you would never ask while you are grabbing Chick fil A in the dining hall or standing by a cooler at a party. It is a question about meaning but it is also essentially personal. It is a question that will be answered differently according to what a person’s role at the university is, how connected he or she feels to people on campus, and how long he or she has been here. And it is a question that I hope we start asking one another at least once a year.

There was considerable skepticism about the benefits of holding synod sessions on campus this Spring. Skepticism is not even the right word: indifference is more accurate. As I sat in the lobby of the student center with my banner, flyers, and free pens, I faced the humiliating experience of being ignored by students who were (understandably) more interested in getting lunch and meeting their friends than answering the question, “What does it mean to be Catholic?” I had been informed by two students early in our process that without loud music, hot chocolate, or brightly-colored banners, I was unlikely to draw a crowd through this “tabling,” but…  You try coming up with a Spotify playlist for a synod. You try telling 20-year-olds that they will have a good time – I swear! –  sitting in a circle with professors and staff talking about what being Catholic means today. It’s hard to convince people of this. But perhaps the craziest part is: it’s true.

The students who came to the synod sessions this semester got a lot out of them—besides the food. I know this because a couple of them came to all three sessions, brought their friends, or decided to take a class with a professor they had never met before this process. As we were closing up the session, giving away the excess Domino’s pizza, Stephen and I talked with lingering students who asked us if we would be doing “more of this” next year— asked it as if they sincerely wanted to have more synod sessions. The format – ‘talking piece’ and all—really did lead to a meaningful listening experience for everyone.

I suspect that the faculty and staff got even more out of it than the students, though.

Academia is not known for being a warm and caring place. Academics are often competing for tenure, competing for grants, or just competing in their heads. I have been told (since I started during the pandemic) that particularly after COVID there has been a certain lack of community-feeling around campus. This is not surprising—nearly two years of fewer students on campus, many people working-from-home, and people in masks all the time is bound to take a toll on a place’s sense of togetherness. We are all out of practice in being a community. This is a shame because the community feeling at Catholic U. is one of our strongest points. As a student twenty years ago, I remember being struck by the simple fact that on my campus, students routinely held doors for each other, but across town at Georgetown, they did not. Catholic U. is a place where people care about each other—or at least, it means to be.

The faculty, staff, and alumni who participated in the synod sessions had an opportunity to remember and rediscover what Catholic University is all about. “What a wonderful chance it was to reflect on our community,” one of the facilitators wrote afterwards. “It was a joy and encouragement to meet [the others in the group] and to know that they are building up their small corner of the Kingdom at our University,” said a faculty member. One of the other facilitators, who is also a friend of mine, said that she would happily continue doing these kinds of events next year, and suggested that we could get more participation too, if we could only think of something to call it.

“I think one of the problems was just that it was called a synod,” she said. “No one knows what that is.”

“But what would we call it?”

“The problem is,” she noted, “the words that would be accurate have all lost their meaning. It’s community-building; that’s what it is. I met people on campus that I might never have met and really listened to them. But the phrase ‘community-building’ is used for things that no one likes to do, like ice breakers and trust falls… I don’t know what you could call it.”

There is no easy language to describe what the synod sessions ended up being for us here at Catholic U. They were listening sessions, yes—but sometimes when people hear “listening session,” they see a room full of people with one microphone and a committee of people up front ready to “listen.” That was not this. They were solidarity circles, yes—but many people have never heard that term before, so that does not help much. The discussions were guided, but not guided; open, but confidential; simple but profound. I do not know what they were, really. But they were good.

So I am sincerely asking you: if we wanted to keep doing events like the synod, what could we call them?