Introducing the podcast Crisis: Clergy Abuse in the Catholic Church 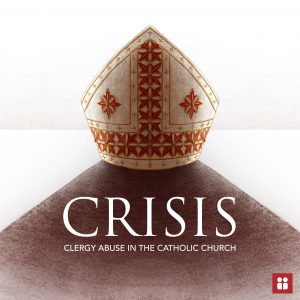 Crisis: Clergy Abuse in the Catholic Church is a podcast that tells the story of the clergy sexual abuse crisis in the Catholic Church. Hosted by Karna Lozoya, a veteran Catholic journalist and communicator, the show leads us from the landmark case of Fr. Gilbert Gauthe in 1985 through the summer of 2018 and the subsequent February 2019 meeting in Rome that finally got the Church throughout the world on the same page about abuse.

The podcast starts in 2018, when it was revealed that a high-ranking American cleric, Cardinal Theodore McCarrick, abused minors as well as seminarians throughout his career. Shortly after this revelation came to light, there were two more bombshells: the Pennsylvania Grand Jury Report, detailing years of sexual abuse and cover up by the Catholic Church, and the Archbishop Carlo Maria Viganó letter, accusing Pope Francis of knowingly furthering Cardinal McCarrick’s career. It is in this context that Crisis explores how the Church got to this point, what changes have been made, and what still needs to happen.

In each episode of the podcast, Host Karna Lozoya threads interviews with bishops, survivors, reporters, lawyers, social workers, and others along the way with best in the world reporting, actualities, and an immersive sound environment, all with the aim of showing us how the Catholic Church has both successfully and unsuccessfully sought to eradicate clergy sexual abuse.

Listeners can expect to hear from principal actors in the headlines of 2018, including but not limited to:

Crisis is for the person who wants an honest and transparent look at the current situation of the Catholic Church with regard to sexual abuse. Listeners will find Lozoya to be a balanced and thoughtful guide who competently navigates the most difficult terrain of the sexual abuse crisis. Her deep knowledge of the myriad issues, the complexities of Church politics, and the lingering questions in the minds of faithful Catholics, gives her a unique vantage point from which to tell this story.

Crisis is the first podcast of The Catholic Project, directed by Stephen White. It is an initiative of The Catholic University of America that seeks to renew and build up the Church through authentic collaboration between the clergy and the laity. It is produced by Jeff Grasser; Written by David Freddoso and Sara Perla; Sound design by Paul Vaitkus; Music by Gautam Srikisham and Jay Tibbits.

Subscribe, listen, and share these engrossing and somber stories as we bring you Crisis: Clergy Abuse in the Catholic Church. Episodes will begin running weekly on September 9, 2020.

Listen on Apple Podcasts, Spotify, Stitcher, or wherever you get your podcasts!