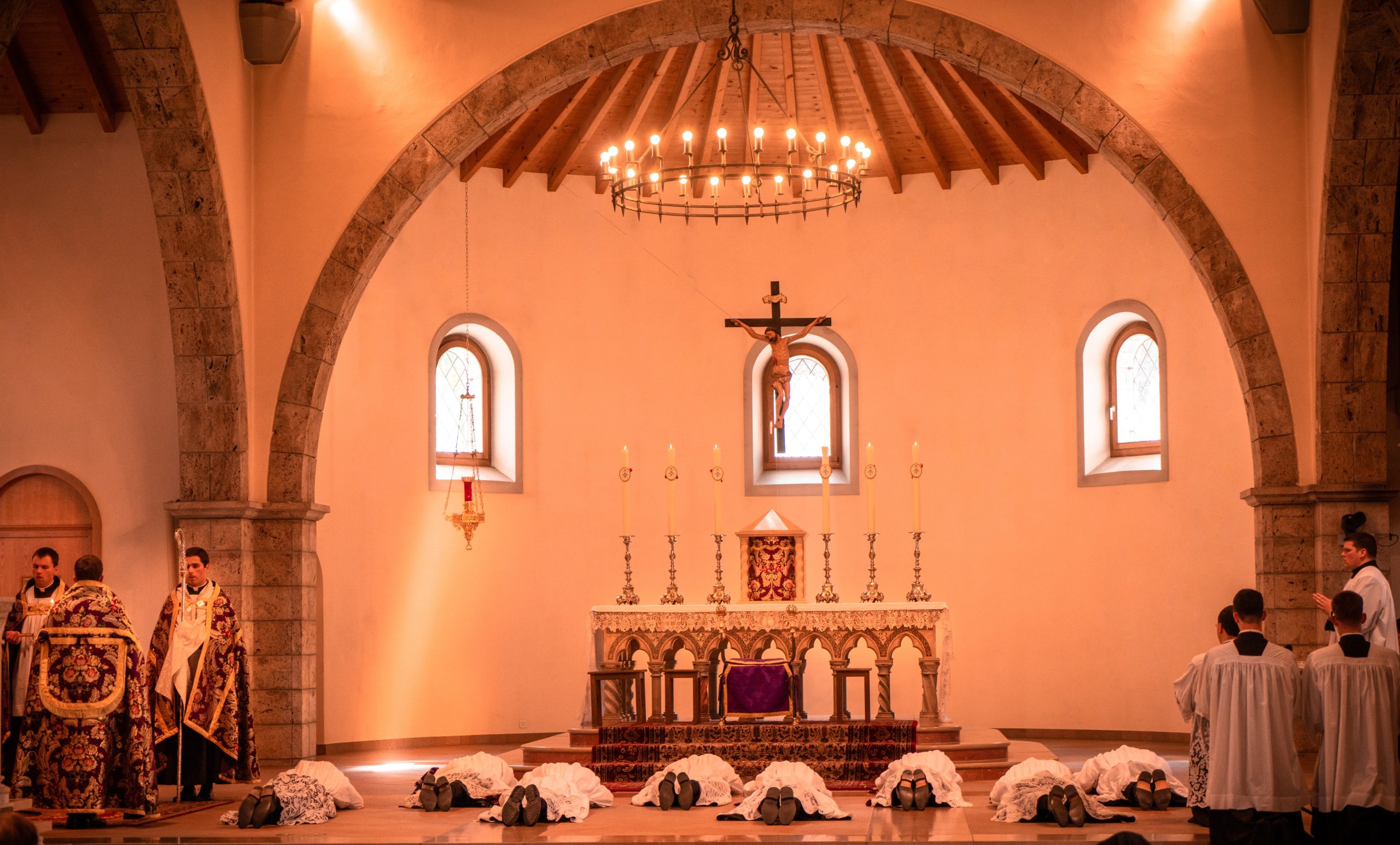 In college, someone recommended that I read A Right to Be Merry by Mother Mary Francis, P.C.C. When I finished it, I knew two things: cloistered religious life was absolutely beautiful and I was not called to it. I love Mother’s writing so much; her wisdom comes through every page, and today I’m going to use her book Chastity, Poverty, and Obedience: Recovering the Vision for the Renewal of Religious Life to talk about obedience within the Church. Mother Mary Francis focuses on the Second Vatican Council’s decree on religious life (Perfectae Caritatis), but I think her thoughts are still relevant today, because I think that before we get to authority or power, we need to talk about obedience.

Wherever there is authority, there is obedience. One orders, the other obeys; Otherwise, authority would be meaningless. If you tell someone to do something, and they do not do it, then even if you may have authority on paper somewhere, you do not have it in reality. True authority makes things happen; it is obeyed. This is shown to be true throughout the gospels. Jesus is credible as God because when he says “be healed,” people are healed; When he says “come out,” demons come out. When he says, “Follow me,” people leave everything behind. Jesus rebukes the wind and the sea, they obey. “What sort of man is this, whom even the winds and the sea obey?”  the disciples ask among themselves (Mt 8: 27).

Knowing this to be true, the centurion says to Jesus, “For I too am a person subject to authority, with soldiers subject to me. And I say to one, ‘Go,’ and he goes; and to another, ‘Come here,’ and he comes; and to my slave, ‘Do this,’ and he does it” (Mt 8:9). This passage strikes me because it begins with “I too am subject to authority,” implying that the centurion has intuited (if not heard) that Jesus subjects himself in obedience to the Father before being placed in authority over the natural world. Jesus’ subjection to the Father is not the same as our subjection to him, of course, but we are called to imitate his obedience nonetheless. “Have among yourselves the same attitude that is also yours in Christ Jesus, Who, though he was in the form of God, did not regard equality with God something to be grasped” (Phil 2: 5-6). If Christ had rebelled, had turned back, he wouldn’t be himself—but he also would have less power to ask for our obedience.

Christ asks for our obedience in many ways, not the least of which is to follow flawed human beings as our bishops. We are consigned to the care of a bishop and, as a rule, ought to be obedient to him without grumbling. Mother Mary Francis writes, “One evidence of spiritual adulthood is the capacity for becoming like a child.” Since pride is the sin that lurks under all other sins, deliberately submitting oneself to another’s judgment is one way of fighting against it, and it is built in to the Church. A lay person has to accept the Mass schedule set up by the pastor; A pastor has to hand over a certain amount of the parish’s income to the diocese; A bishop has to show support for initiatives of the Holy Father, etc. Our obedience in these areas is a way of honoring Christ, who called that person into a position of authority over us (and conversely, did not call us to it). As Mother Mary Francis notes about a religious vow of obedience, “[It] is not a matter of making a decision but of engaging oneself in a lifetime of personal decisions. I must each day anew and even in every varying situation decide to obey.” I think many of us Americans faced a new situation during the pandemic, when our bishops mandated various things that some did not want to do. Did we decide to obey, even when we disagreed?

The Limits of Obedience

Over and over again in the literature about the vow and virtue of obedience, in religious life and otherwise, is the caveat: unless it be a sin. You must obey a proper authority… unless what you have been ordered to do is a sin. This applies at every level, even when you are a child under the authority of your parents. God is the authority from whom all others get their authority, such that if even your parents order you to do something that goes against God’s will, you do not have to obey.[1]

Generally, thanks be to God, I do not think that we are in a situation where priests, superiors, or bishops regularly ask those under their authority to commit crimes and/or sins, but there have been numerous cases like that in the last few years—
Siobhan O’Connor comes to mind. She clearly believed, rightly or wrongly, that being obedient to Bishop Malone’s orders was wrong or sinful, so she chose to become a whistleblower instead. Whistleblowers tend to believe that they must be disobedient to an immediate power in order to be obedient to a higher one. I would hazard the guess that most whistleblowers are pushed into that position gradually. They probably attempt to question the authority first, but meet with resistance, and then in the end decide to “go public” because they feel that it is their only choice.

Obedience to a higher authority in the Church, then, is not required in the case of sin, but is expected in all other areas. There is a clear application of this teaching right now regarding the Traditional Latin Mass (TLM) in the Washington, D.C. area. The bishops of both the Archdiocese of Washington and the Diocese of Arlington recently published their determinations of how the pope’s directives in Traditionis Custodes are to be applied. Many people (cleric and lay alike) who are attached to the TLM for various reasons are unhappy about the new rules. Lay people have said that they will stop supporting the diocese(s) financially, that their parishes will have to close, that vocations will suffer, etc. But there really is no argument about whether the bishops can do what they have done. They clearly have the right (and responsibility) to do it; It’s done. The bishops govern their dioceses and the clergy and laity must be obedient, even if they disagree. If accepted and offered up as a sacrifice, this trial can be fruitful for those people and communities. To not attend a TLM is not a sin, so it seems obvious that obedience is called for, and it is possible that this time is a necessary pruning of people who are unwilling to submit to a higher authority. Consider the example of St. Pio who submitted for years to being prohibited by the Church from saying Mass publicly or hearing confessions. It was unjust in his case, yes, but St. Pio turned it to profit by accepting it and suffering that injustice.

The Limits of Authority

But as obedience has limits, so does authority, since that authority extends only over certain areas. Stephen White is my supervisor at The Catholic Project, so he has authority over when I work from home, for example, or when I take vacation, but his authority is limited. He cannot compel me to do anything that is unreasonable or not within my job description (“other duties as assigned” notwithstanding). Similarly, the authority granted by Christ to clergy members at ordination is to teach and govern the faithful, not to do everything related to parish life, or to boss lay people around indiscriminately, nor does it preclude consultation. Lay people have perhaps acquiesced too often to unreasonable demands or preferences that have nothing to do with teaching or governing, and thus bear some responsibility for clericalism.

Even outside of sin, there are things that a bishop, for example, ought not request of a lay person, in order to avoid seeming to expect obedience in a matter that is not related to his authority. For example, a bishop should probably avoid asking a lay person he doesn’t know (and who is not employed for such tasks) to get him a coffee or a cookie during a meeting. A cookie is not necessary to good governance, but the lay person may feel (incorrectly) that he or she must go get it because the bishop asked for it. This doesn’t go only for bishops, but for anyone in a position of authority. For example, even though I love to bake, it’s important that I offer to bake for colleagues’ birthdays and have never been asked to do so by Stephen, because if your employer asks you to do something, it feels compulsory.

In order not to imperil good obedience, it is best to consider when authority should be used and when it should not. Incidentally, this is why any sexual relationship between a priest/ bishop and a lay person is suspect.

When all parties understand where authority ends, something beautiful can happen: free acts of service. This is where souls thrive because they are given to God and serve others out of that fundamental surrender. I am not compelled to bake for people in the office; therefore, I am free to do so; A lay person does not have to treat a bishop, so he is free to pick him up a coffee out of friendship. And vice versa.

I heard a story lately of a bishop who called into the office to ask if he could pick up coffee for any of the staff that was going to be in the morning meeting. That is the way it ought to be. Bishops, priests, and lay people all serving one another because they are serving Christ. This is only possible, I think, when the person with authority makes it clear that he/she intends to use that authority to serve. “This was to be the normal situation, then,” writes Mother Mary Francis, “a superior with good hearing, ready to listen, and full of love and compassion: a subject without fear either to speak or to submit.” May we continue to strive for the Church to be who she is, in obedience to the one head: Christ.

[1] If your parents announce that you aren’t going to Church on a Sunday, and you can’t get there, obviously that’s not your fault.