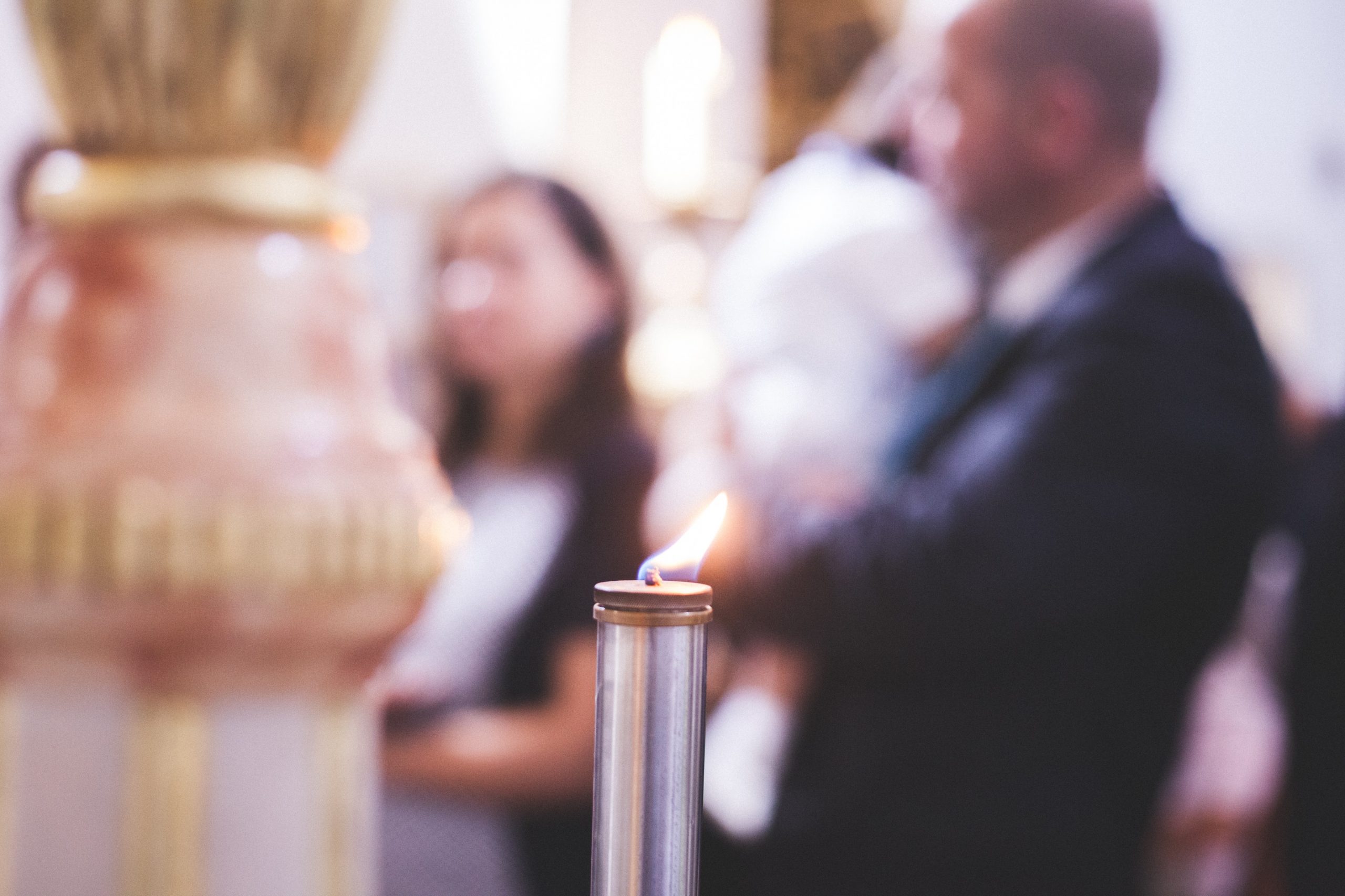 Baptism is the Rite You Are Looking For

One of the things that attracted me to Pope Francis early in his pontificate was his willingness to challenge established protocols and to do what he thought was appropriate in the circumstances. Consider how he paid his hotel bill the day after he was named the pope, or the way he constantly asks pilgrims to pray for him. When he met with young people before the synod in March 2018, Pope Francis
encouraged them: “Emerge from the logic of  ‘it has always been done this way’, so as to follow creatively the tracks of authentic, yet creative, Christian tradition” (no. 4). This is not the first or last time he has said something like this, he repeats the refrain that “because it’s how things are done” is not a good reason to keep doing them that way. He even went so far as to call that attitude “suicide.” The pope has been asking the Church for over eight years now not to be complacent and to “think outside the box” (no. 33). As someone who likes rules, but only if they make sense, I appreciate this.

Of course, it should go without saying that the pope only means for us to question practices or rules that are man-made. He does not call into question divine Revelation or the divine law. This is why the repeated discussion of women’s ordination is so tiresome to me. I don’t know if there can be any clearer way of saying that the priesthood is not man-made, and thus not changeable by us, than St. John Paul II declaring, “the Church has no authority whatsoever to confer priestly ordination on women and that this judgment is to be definitively held by all the Church’s faithful” (Ordinatio Sacerdotalis, no. 4). To keep bringing it up is to fall into the trap of repetition—repeating a discussion of 50 years ago. It fails to accept what Christ chose to do and to be creative within the authentic tradition (see Pia de Solenni on this). It seems to me that the pope is asking us to use our imaginations, especially in the current synod process.

In this spirit, I have a proposition: Instead of adding a new rite of installation for amorphously-defined lay Catechists, let’s get rid of formal installation of Lector, Acolyte (or “Extraordinary Ministers of Holy Communion”), and Catechist altogether– at least in the U.S. I think there are good arguments to be made for these formal institutions in places where ordained ministers are few and far between (see this article regarding the Amazon region).

Before one gets rid of something, one must first seek to understand what it is for. Here is Chesterton’s way of explaining this:

In the matter of reforming things, as distinct from deforming them, there is one plain and simple principle; a principle which will probably be called a paradox. There exists in such a case a certain institution or law; let us say, for the sake of simplicity, a fence or gate erected across a road. The more modern type of reformer goes gaily up to it and says, “I don’t see the use of this; let us clear it away.” To which the more intelligent type of reformer will do well to answer: “If you don’t see the use of it, I certainly won’t let you clear it away. Go away and think. Then, when you can come back and tell me that you do see the use of it, I may allow you to destroy it. (The Thing, 1929)

The formal roles of Lector and Acolyte (variations of which were called “minor orders” before Vatican II) have, in the U.S. and other places, been seen as stepping stones on the path to ordination for seminarians. Pope Paul VI notes this relation to Holy Orders in Ministeria Quaedam, his motu proprio, while noting that the roles have also been exercised by the laity at times. Thus– in the spirit of Pope Francis before Francis, if you will – “What is obsolete in these offices will thus be removed and what is useful retained.” Pope Paul VI makes a number of changes, including when the Church understands a man to enter the clerical state. He removes the “major” order of “sub-deacon” and asserts that, “entrance into the clerical state is joined to the diaconate,” and, “What up to now were called minor orders are henceforth to be called ministries.” The pope goes on to explain the two ministries of Lector and Acolyte, which basically correspond to the roles as we know them today and as they are explained in canon law. The year is 1973, and these ministries are reserved to men. There is no theological reason for this restriction offered, but the document does say that deacons and priests are to be installed in these ministries prior to ordination. It seems implied, therefore, that the idea is to familiarize men with ministry at the altar.

In the years following the Second Vatican Council, women begin to fill these roles in parishes around the world. Women read at Mass at the Vatican. Children read at Mass. Lay people serve as Extraordinary Ministers of Holy Communion (EMHC). They do so without any sort of formal installation or rite. The description of the Mass from St. Justin Martyr (c. 155 A.D.) even makes a distinction between a reader and presider. I was in the third grade the first time that I read for Mass. While reading the Scripture for the whole congregation can feel special, at the same time, it is a simple service. Someone has to read, preferably someone who can project their voice and who doesn’t stumble when reading aloud, and there’s no reason that it has to be the priest. Women (and children!) may read aloud just as well as (or better than) men, and it has not led to any confusion about who the celebrant is.[1]

Thus, Pope Francis has, rightly, discerned that there is no reason to restrict the ministries of Lector and Acolyte to men, so he changed canon law last year to allow the formal installation of women in these roles. Such a change at the Vatican level is not instantaneous: the USCCB has not changed their complementary norm yet (complementary norm to canon 230, § 1) so in the U.S., women are not permitted to be installed in these roles right now. In one parish I am aware of, not in my diocese, the pastor has decided that women are not permitted to read at Mass—and yet lay men, who are not seminarians or “installed” formally—are. This is an injustice that should be rectified soon.

Opening these formal, instituted ministries to women was one option available to Pope Francis. I want to suggest another option: getting rid of these formal, instituted roles except in necessity. To use Pope Paul VI’s words, at least in the U.S., these ministries have become “obsolete” and are no longer “useful.” Again, I am referring to the formally “instituted” lector/ acolyte—with such institution being a once-in-a-lifetime event denoting “stability, public recognition and a mandate on the part of the bishop.” If you are a regular lay person who has been reading at Mass or bringing Holy Communion to the sick, you have been doing so “by temporary designation” the whole time. I am guessing that you did not know that, and that it has never concerned you—it has never concerned me. Perhaps my main point here is that a lay person who is serving the Church as a lector, EMHC, or catechist, who has a healthy spiritual life, does not need any sort of formal installation or rite. So instead of expanding a rite and making it so that everyone is recognized and gets a pat on the back (the rite of installation is not a sacrament, after all—it does not confer sanctifying grace), let us recognize instead that lay people serve the Church all the time, in many ways, every Sunday, and they do so without any fanfare. Isn’t that a better option?

I continue to look forward to the synod process (for the record, my parish hasn’t communicated anything at all to me about it….) because it may give us the chance to talk about this kind of thing. In the 21st Century, as Mass attendance falls and our young people are leaving the Church in droves, what are our priorities? Are we spending time developing a rite of installation for people who, by and large, did not ask for one and do not need one? Or does that just perpetuate what Pope Francis has called a self-referential Church?

A friend recently told me a story about organizing a Mass. He was assigning readers among the lay people present and a seminarian came up to him to say, “Actually, I should read, because I have been formally instituted as a Lector.” This is the kind of clerical attitude that we need to move away from, and it seems to me that we can more easily do that by getting rid of installing “special” people as Lectors, Acolytes, or Catechists, and instead recognizing that:

In virtue of their baptism, all the members of the People of God have become missionary disciples (cf. Mt 28:19). All the baptized, whatever their position in the Church or their level of instruction in the faith, are agents of evangelization, and it would be insufficient to envisage a plan of evangelization to be carried out by professionals while the rest of the faithful would simply be passive recipients. The new evangelization calls for personal involvement on the part of each of the baptized. Every Christian is challenged, here and now, to be actively engaged in evangelization; indeed, anyone who has truly experienced God’s saving love does not need much time or lengthy training to go out and proclaim that love. (Evangelii Gaudium, no. 120)